Here is a nice rundown on Hudson models through the years...

The car shown here is a 1912 Hudson Touring.
image at ConceptCarz.com

After the 1954 merger with Nash-Kelvinator, the Hudsons looked like this ad from 1957, when the name was dropped along with that of Nash, and AMC concentrated on the Rambler name. 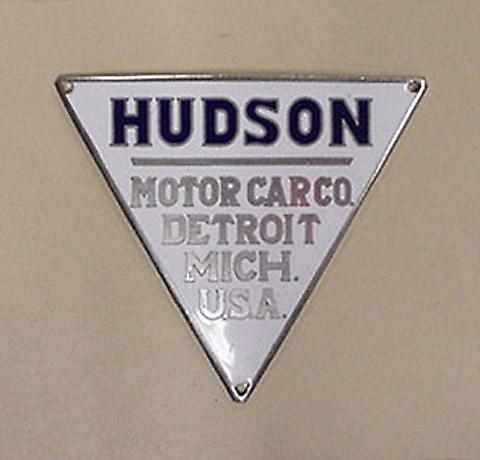 Hudson Motor Car Company was one of the most respected of car companies right from the beginning, both for the build quality, and for performance that was unmatched in their price range.

In 1903, E. R. Thomas began producing cars in Buffalo, New York.  That year, while still a test driver for Olds, Roy D. Chapin sold out his share in the Automobile Equipment Company and invested in the Thomas venture. Also on the technical team was engineering star Howard Coffin.


In 1909, Chalmers bought into the now-struggling venture and renamed it Chalmers-Detroit.  Later, when Maxwell and Chalmers combined, a lawsuit resulted. Coffin and Chapin, who had whipped up a design for a new, faster, smaller car, sold out their shares in E. R. Thomas-Detroit. Hugh Chalmers joined up with Coffin, Chapin, Frederick Bezner, and James Brady, each putting up $1500 toward the venture.  Roy D. Chapin convinced department-store magnate Joseph L. Hudson to back his new idea, to the tune of $90,000, and one consequence was that the name of the new company was the Hudson Motor Car Company.


Hudson was a leading maker in sales from the beginning, and for a long time was a very viable concern.
Changing conditions and failure to modernize eventually forced a merger to cut production costs, and in 1954, Hudson Motor Car Company merged with Nash-Kelvinator Incorporated to create the now legendaryAmerican Motors Corporation.

The final Hudson design, the "Stepdown".  This Hornet convertible is from 1954, the year Hudson Motor Car Company merged with Nash-Kelvinator Corporation to produce American Motors Corporation.

Back to previous page